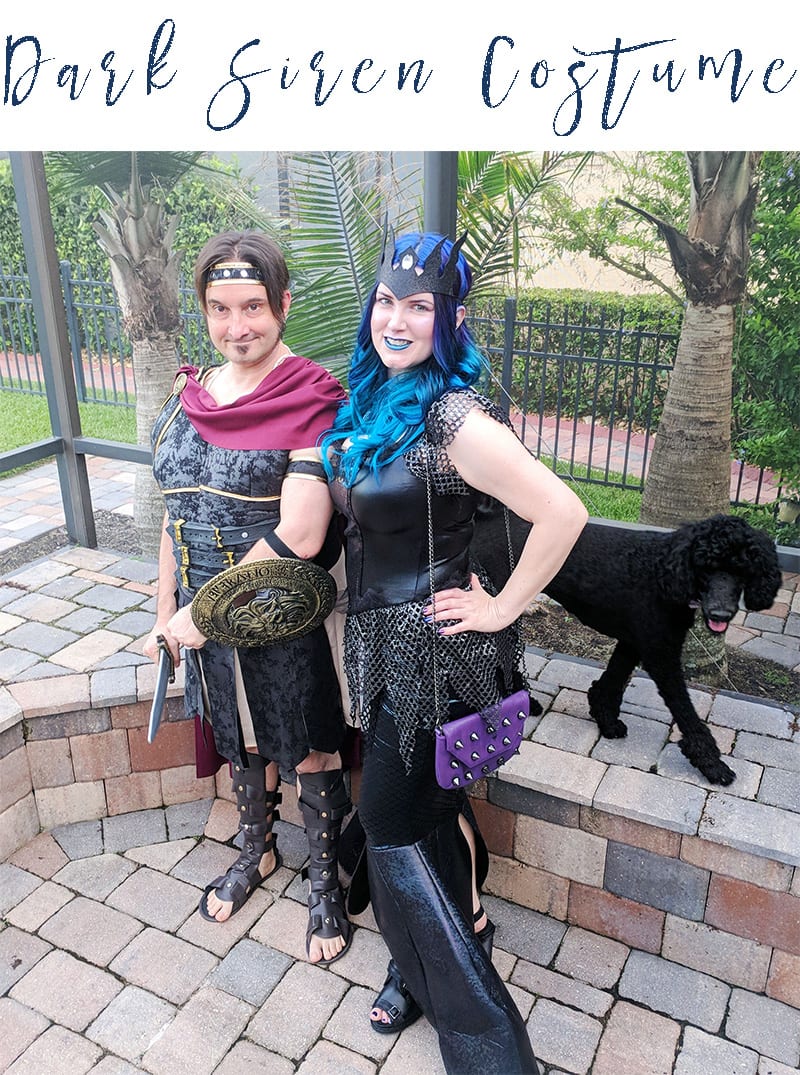 I wanted to share my dark siren costume with you. Many of my friends have theme parties, which I love. It’s an excuse to get dressed up in a costume and have some fun. For my friend Mike’s birthday, he chose a toga party theme because he wanted to dress up as Poseidon and have togas. I went as a dark siren and Ray dressed up as a gladiator. 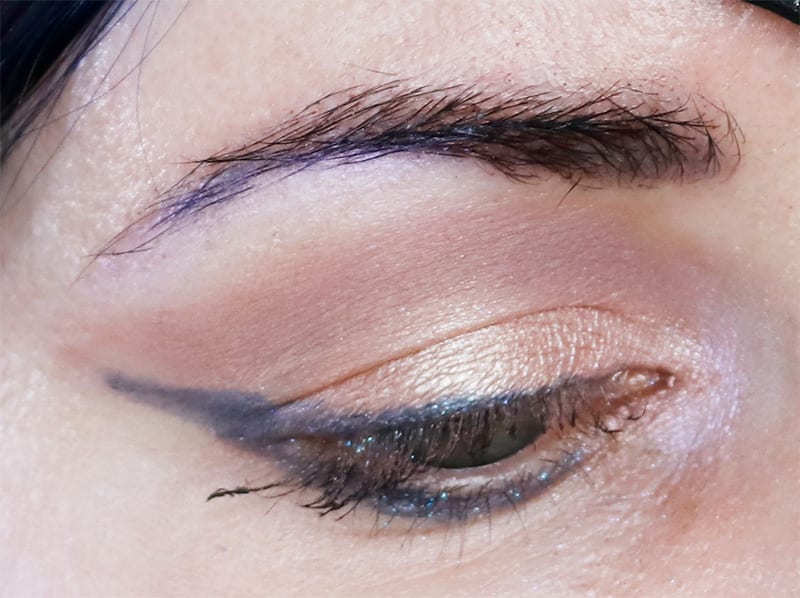 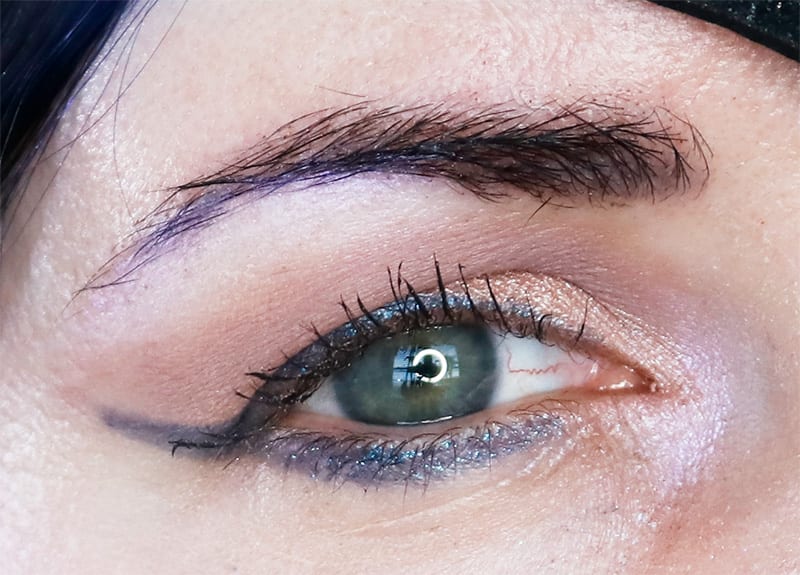 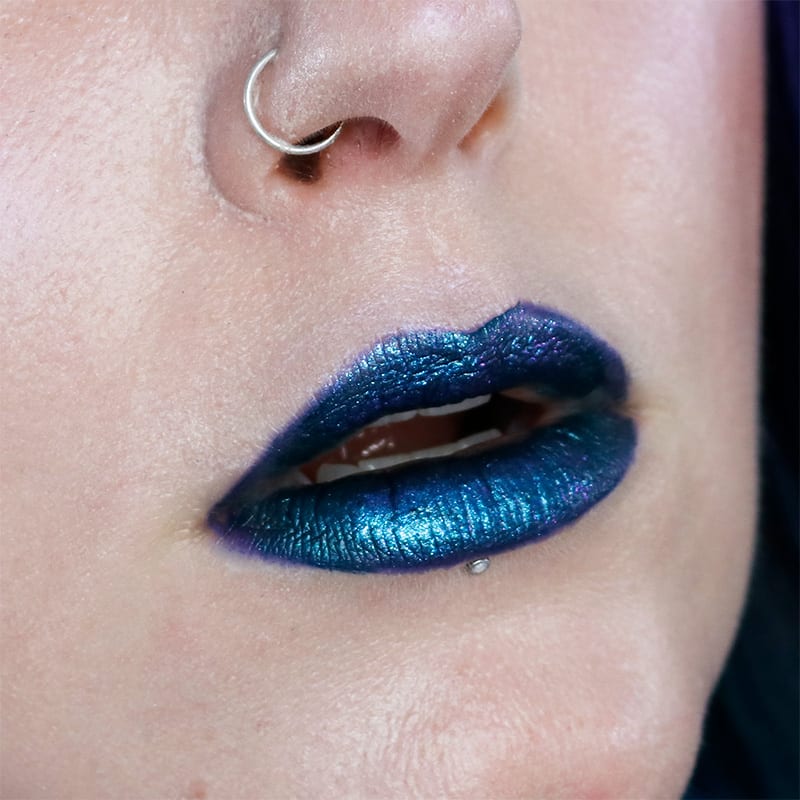 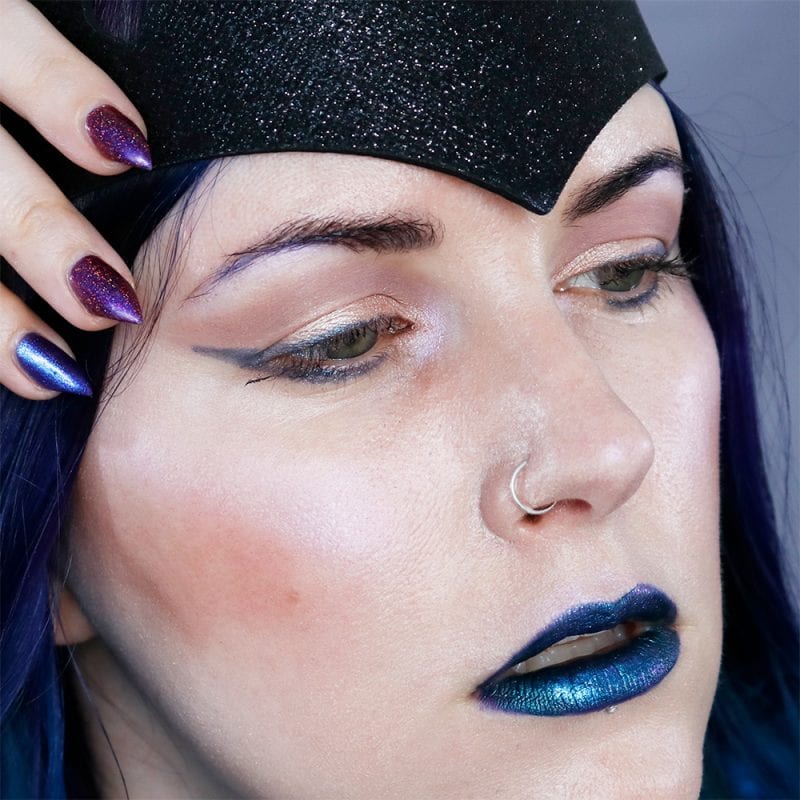 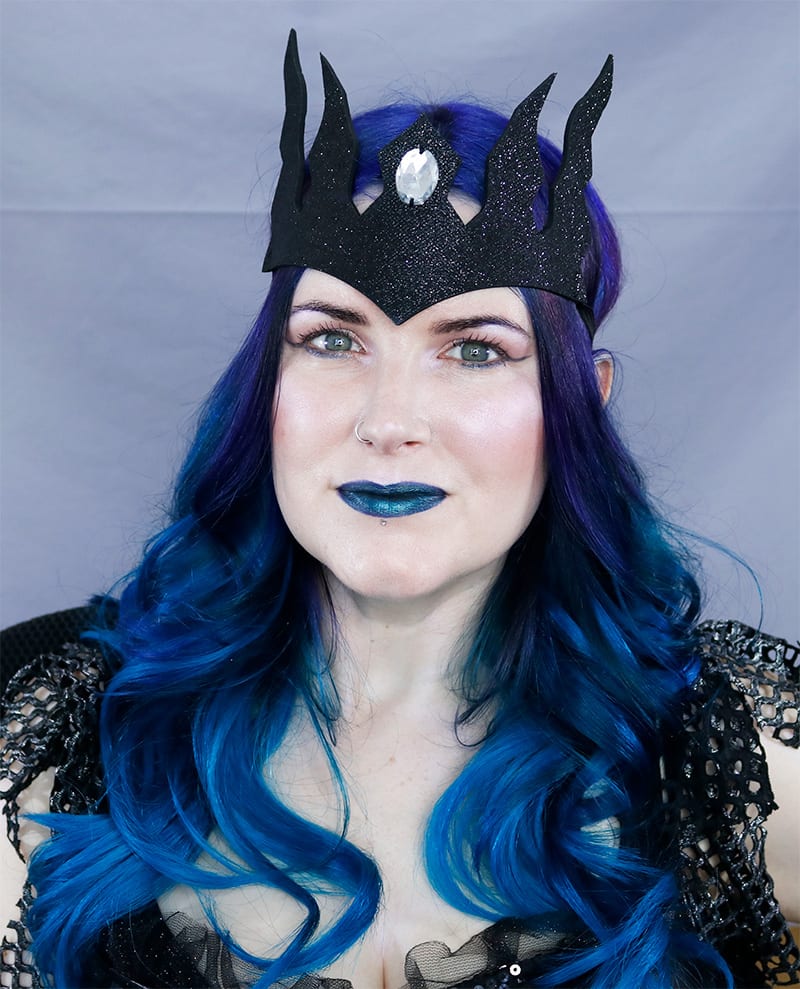 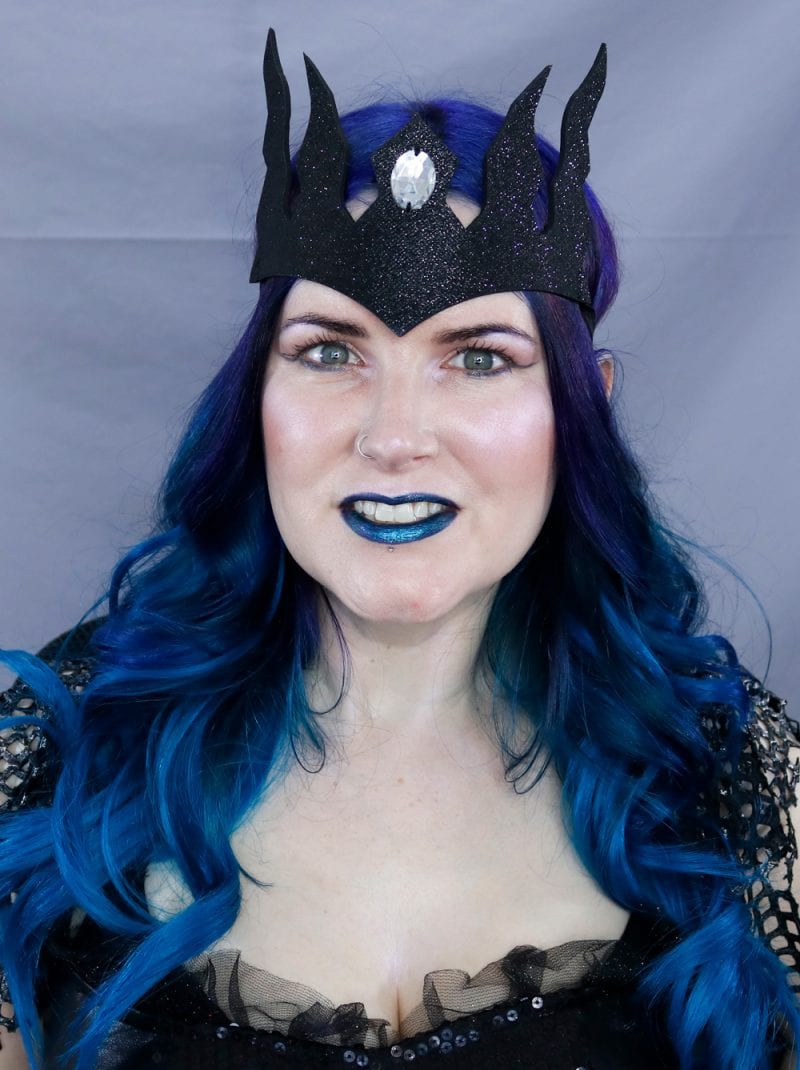 To keep this look quick and easy, here’s how to recreate it.

If I’d had more time to do my makeup, I would  have also added scales to my face. See how with my sideshow mermaid tutorial. 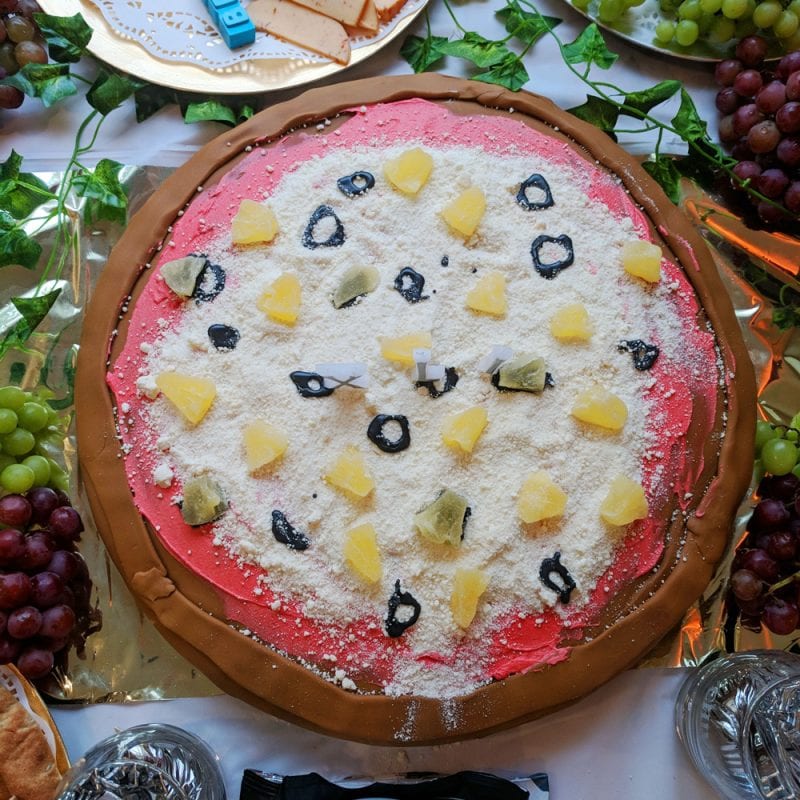 For Mike’s birthday, J made him a Mt. Dew pizza cake. I helped her make the cake. We put in Mt. Dew, as well as the zest of 3 lemons. She did an amazing job decorating the cake to make it look like a pizza. The ‘shredded cheese’ on top is white chocolate that was shredded to look like cheese. 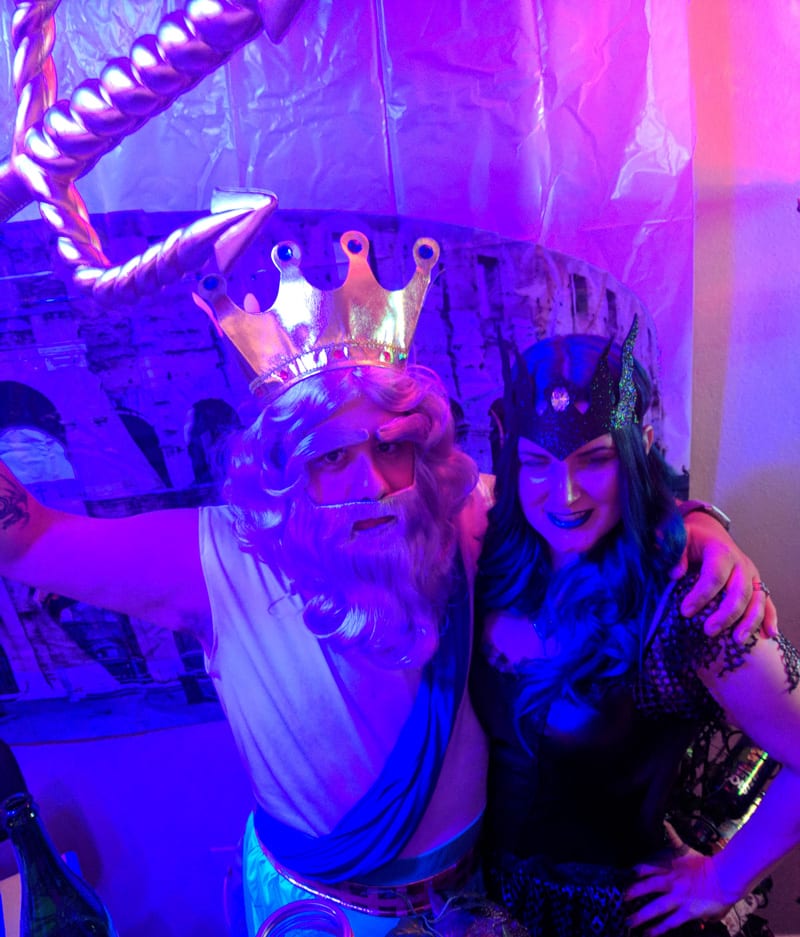 This is the best photo I could manage of me with Mike dressed as Poseidon. 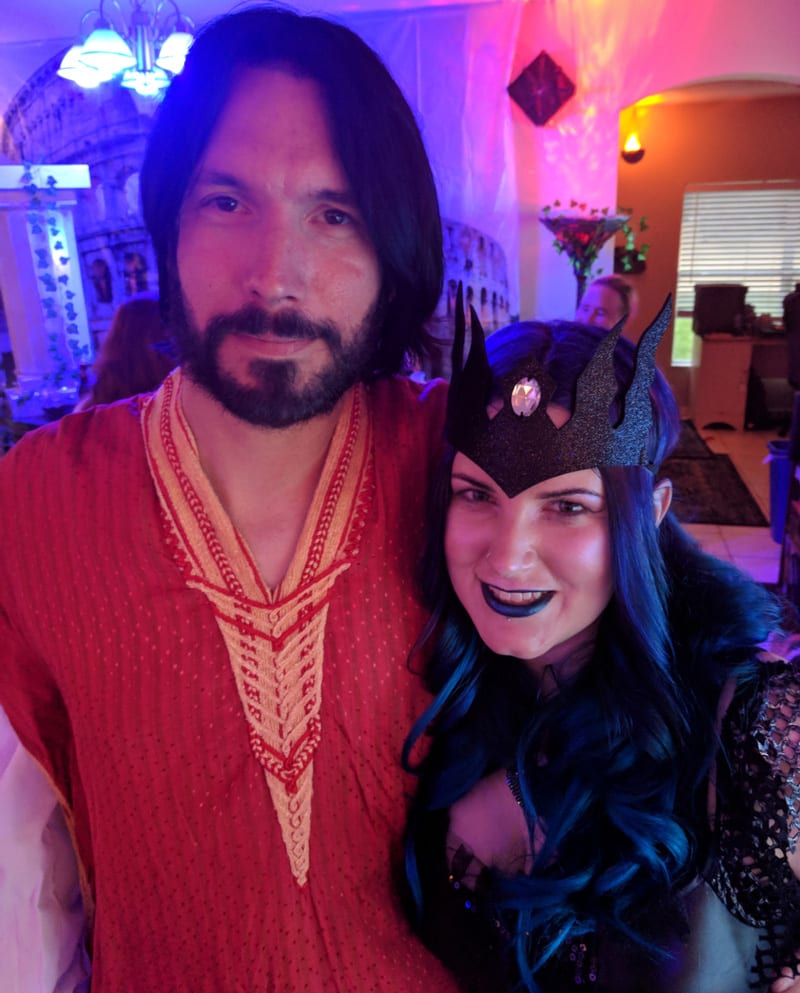 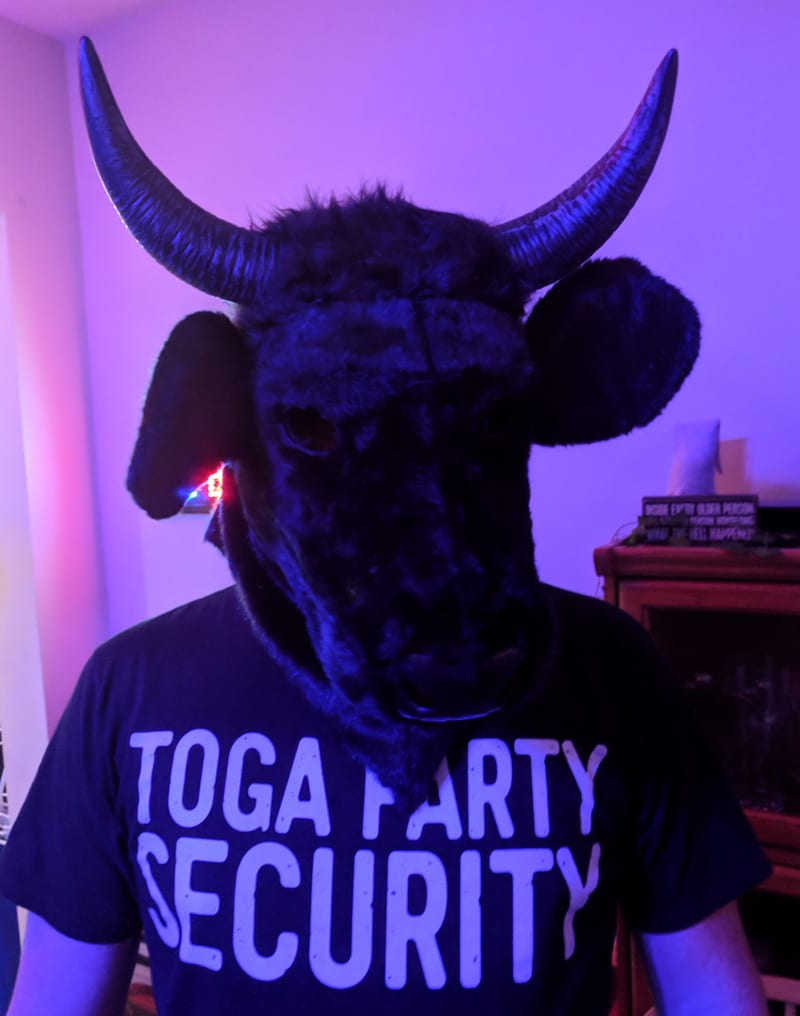 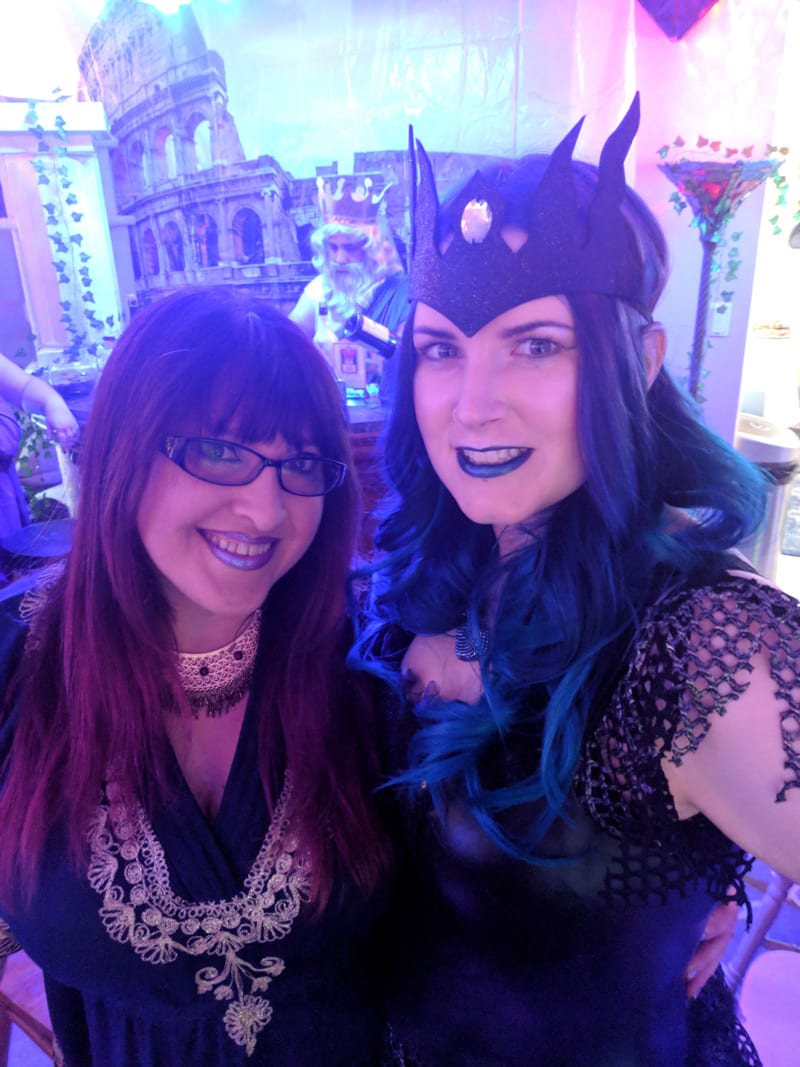 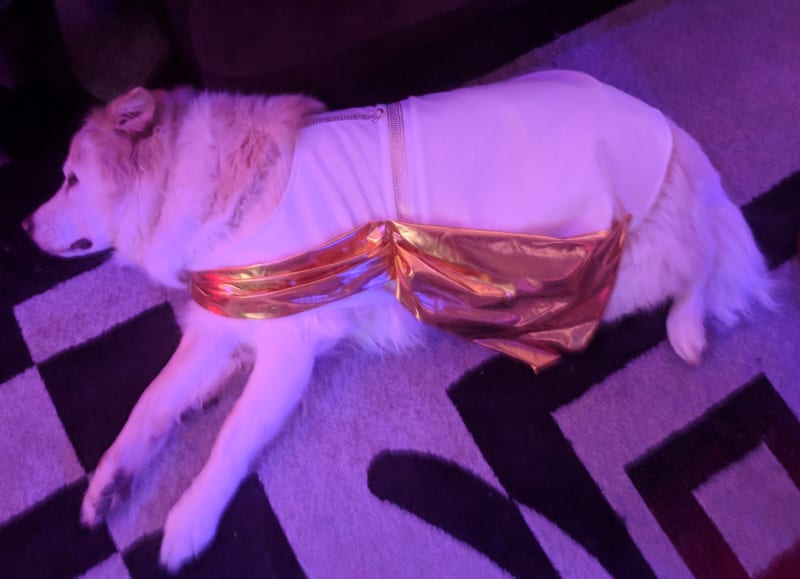 Even Trogdor wore a toga costume! 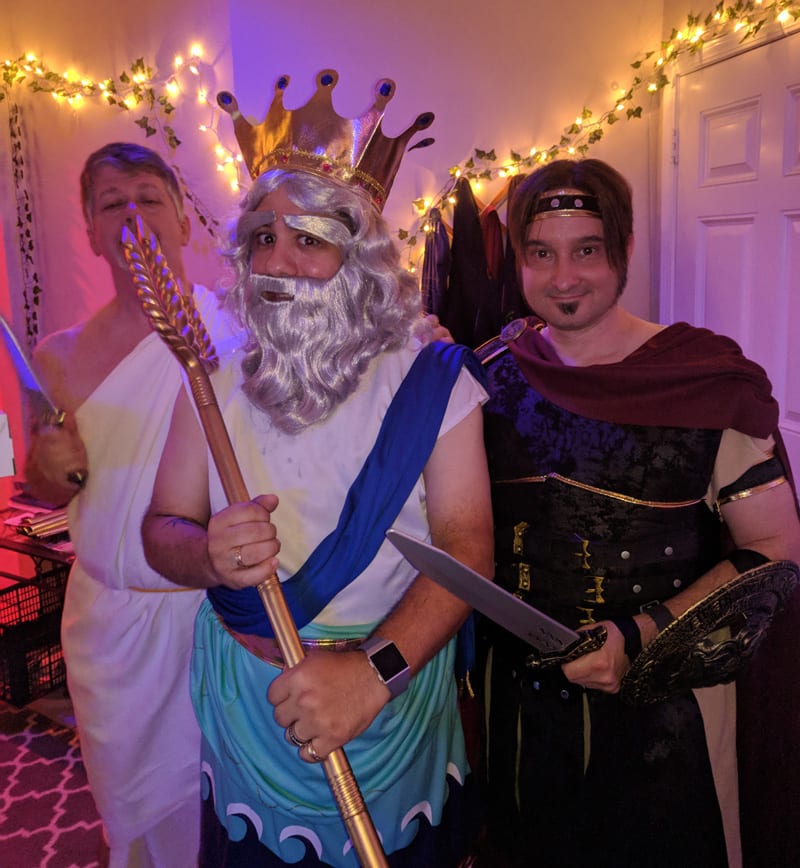 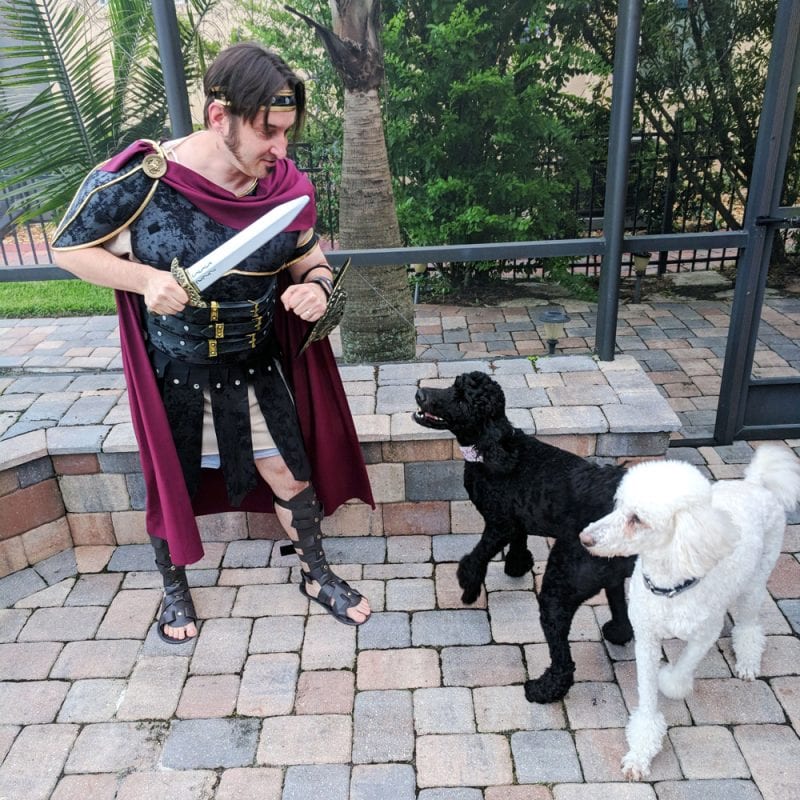 Ray’s Gladiator costume was perfect for the theme. I got a good shot of him pretending to fight the deadly poodle monsters! 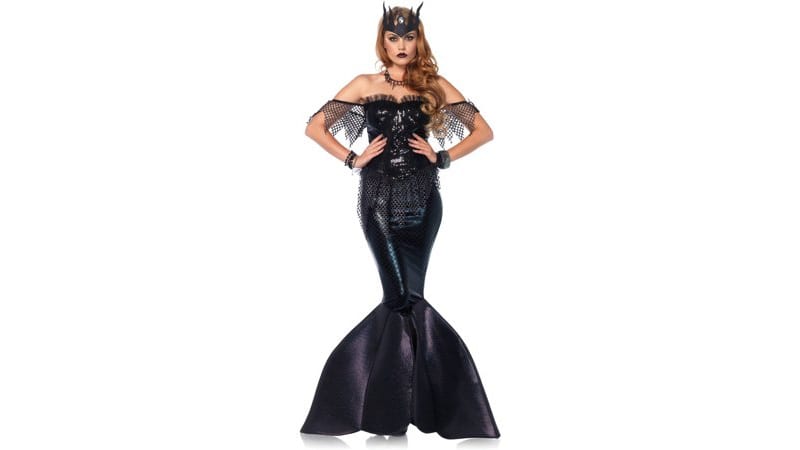 At 5’4″ I’m too short (even in heels) for the tail to look the way it does in the promo shot above. 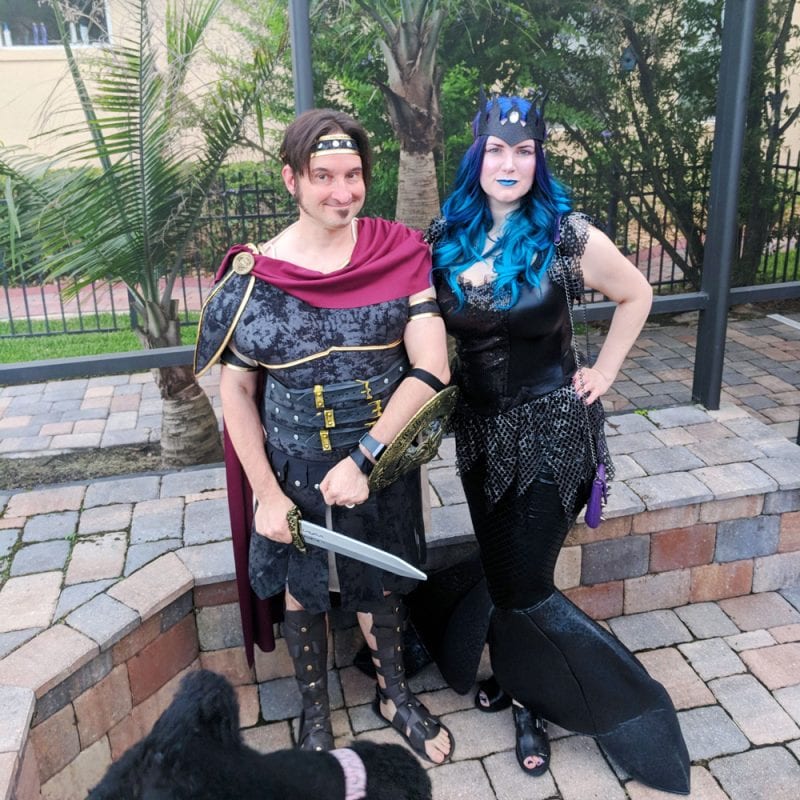 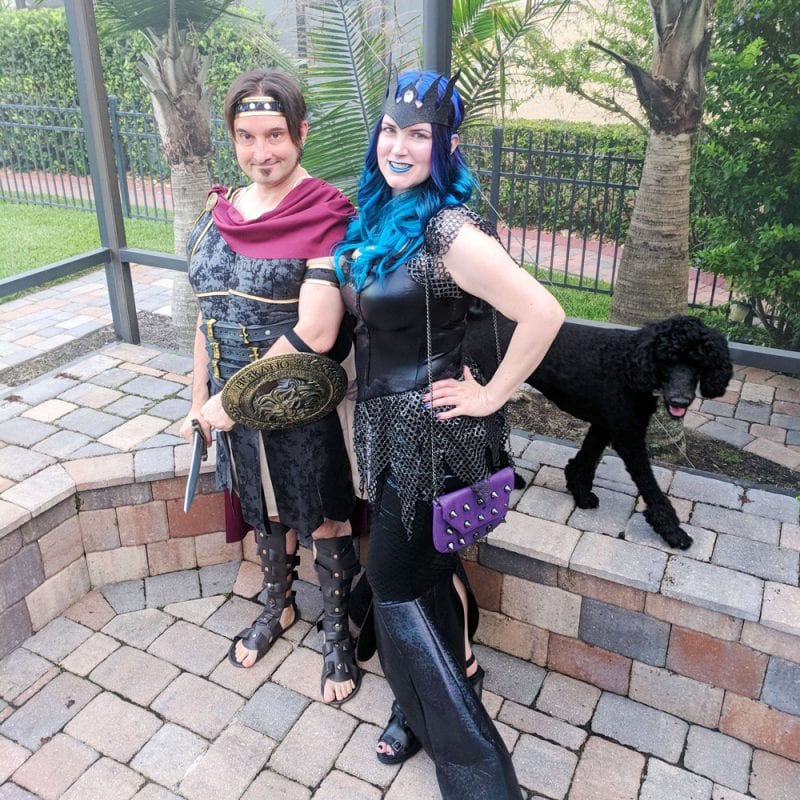 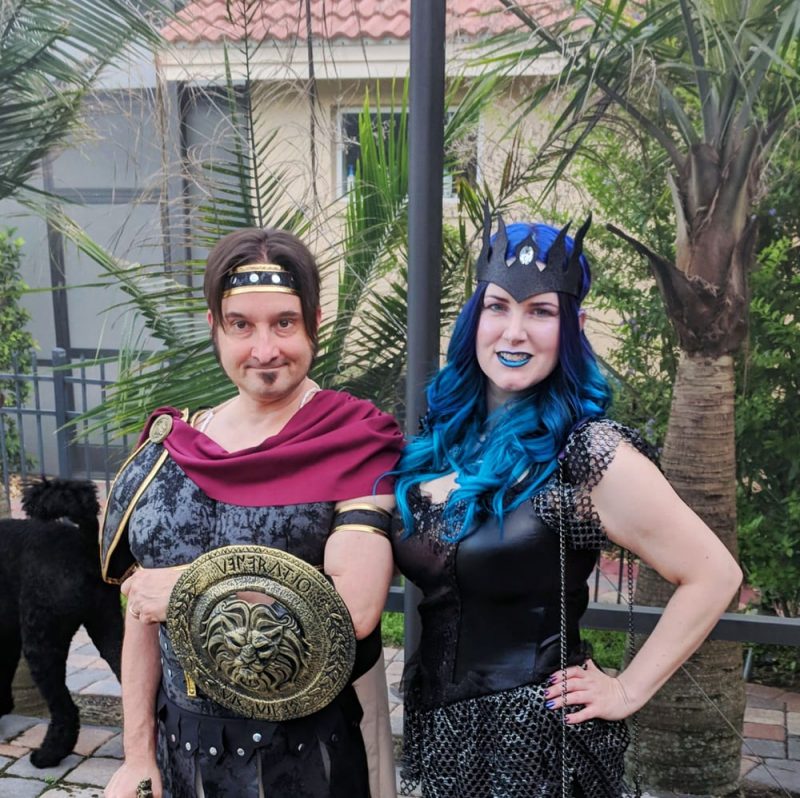 I bought the Leg Avenue Deep Sea Siren, aka dark siren, costume. It’s a sexy mermaid costume with black sequien bustier and net accens. The skirt is lamé with a shimmer foam fin and matching foam glitter jewel crown. I bought size Large because I’m a 36DDD and 149 lbs. I’m 5’4, and this costume was a little long for me, but fit otherwise.

However, this sexy mermaid costume does not breathe! My legs were sweating like crazy and I didn’t think to put any anti-chafing gel on, so I changed out of this costume later and into my backup costume, the Skeleton Mermaid.

Next time I wear my Dark Siren Costume, I’ll be sure to put on yoga shorts or something to prevent my legs from sweating so much. I’m also going to see how it looks with my tallest platform boots, since that will help the tail to look more like the promo shots.

Do you ever throw theme parties? Do you like to dress up?