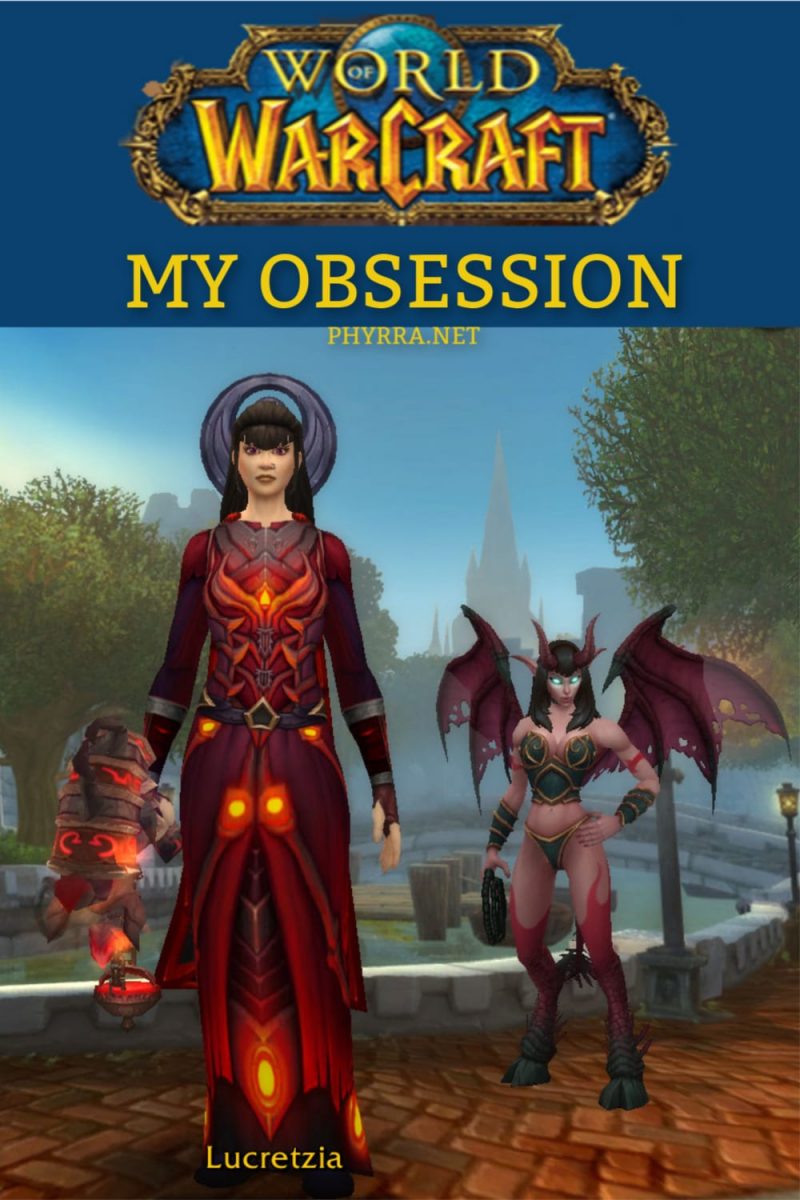 My World of Warcraft Obsession

Hey friends, I thought I would share my World of Warcraft obsession with you. I’ve been playing WoW (as we love to call it) since around 2004. At that point in time I’d played in just about every single MMO (massively multiplayer online game) that had been launched, but there was only one game that I played a ton before WoW, Everquest. Speaking of Everquest, if you remember Clan Krieger from it, let me know. Have you seen the World of Warcraft movie? You can watch it on Amazon.

MUDs (which stands for Multi-User Dungeons), were the first text-based multi-player game I ever played starting in 1996. Everquest came out in early 1999 and I got into it in mid-1999.

Everquest was my first real MMO. It was a brutal MMO in the sense that death was very punishing. Leveling was a long slog of grinding. There were lots of weird idiosyncrasies with the interface, yet I still played it for years until World of Warcraft came out. I would try other games, like Dark Age of Camelot (much love to Marc Jacobs who currently makes Camelot Unchained.) but always end up quitting the other games and going back to Everquest until WoW launched.

Once I tried WoW, I was hooked. It was like World of Warcraft had looked at all the other previous MMOs out there, listened to player complaints and frustrations, and then built a better game.  Was WoW perfect? No, but it really did do everything better than every other previous MMO.

I bet you’re wondering how I can be obsessed with playing a game that came out in 2004 when we’re in 2020. Well the truth of the matter is that World of Warcraft has continued to improve their game play experience to make players happy. I think this is something that some game companies just forget to do. The game needs to be enjoyable and not feel like punishment.

Between 2004 and 2012 I continued to play in MMO betas. Around the same time that I got into World of Warcraft I also played City of Heroes. City of Heroes (at that time) did one thing much better than WoW. It allowed for the ability to ‘sidekick’, which basically translates to if you wanted to play with your friend, but there was a big level difference, you could use that ability to make your levels the same to run instances together.

Since I last played World of Warcraft and came back, WoW now has a similar ability, which is awesome. It makes it easier than every to play with your friends since you can just sync your levels together with the Party Sync ability. You can also buy tokens to auto level up your characters if you want. I don’t recommend doing this unless you have an understanding for the game mechanics of the class you want to play.

Here are the current World of Warcraft classes that you can play and what they do. I pretty much prefer to be a damage dealer, but I  have loved playing Druid healers in the past.

World of Warcraft has a ton of different player races available now. You have your basic races for both Alliance and Horde.

I’m gonna be honest here and tell you my personal opinion on the Allied Races. I think that all of the Horde side Allied races look awesome. On the Alliance side, I really only love the Void Elves. While on the Horde side, I’m dying to unlock Nightborne, Vulpera, and Zandarli Troll.

My World of Warcraft Characters

Medivh is my home server, meaning it’s the server I started on, I’ve spent the most time on, and I’ve got the most characters there. Servers don’t matter as much as they used to because of how Blizzard changed them. They used to be very important and you could only be on the server you started on unless you paid to transfer elsewhere.  Servers now really only seem to matter for Guilds, Trading and the Auction Hall. Higher populated servers will have more items available, while lower population servers will have less on the auction hall, but it may be easier to find rare mobs.

Lucretzia is my main character, the one I’ve played the most. Her name is pronounced like Lucretia (loo kree shah). I originally chose the name as a nod to the gothic song Lucretia My Reflection by the Sisters of Mercy.

I’ll be honest, I prefer the old style of spamming shadow bolt or fire spells vs. all the new spell rotation mechanics, but Warlock is still one of my all-time favorite classes to play. When I first came back to WoW this time around I made a Worgen Warlock to learn the new spell mechanics for my favorite class and leveled that character up to around 66 before playing Lucretzia again.

I honestly recommend starting new characters to learn the new mechanics if you used to play and you want to get back into it. If you want help with rotations, leveling guides and more, I love Icy Veins. They’ve been my go-to site for all WoW character classes for probably a decade. 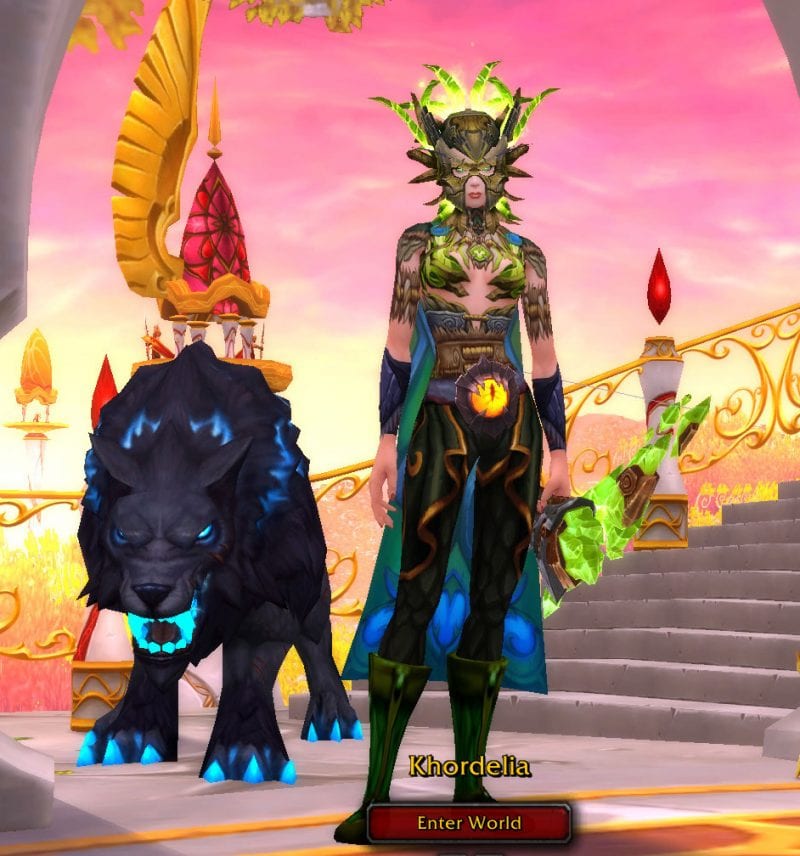 Hunter is my second favorite class to play. On the Role-Play (RP) sever Wyrmrest Accord, I have the 120 level Blood Elf Hunter Khordelia. This is currently my only character on this server.

While I’ve had characters on RP servers in the past, I’ve never done much RP in WoW. This time around, I’ve done a few RP events with friends so far. RP servers and role-playing are fun because you’re spending mental energy coming up with a backstory for your character, their motivations, and more. I love playing D&D (Dungeons and Dragons) so it makes sense that I’d at least want to give RP a chance.

I play a Beast Master specialized Hunter because I love having companions with me. I always have 2 pets out to assist with fights in this specialization. This lets me tame exotic animals to fight by my side in game. Nyx (pictured above with Khordelia) is the black storm wolf Hati skin. Amaya (not shown) is a chimaera (a two-headed flying drake). Normally I spend the time as a hunter to tame down rare skins but I haven’t had the patience for trying to hunt down the purple chimaera skin.

I highly recommend visiting Petopia to help you find cool animals if you play a Hunter in World of Warcraft. 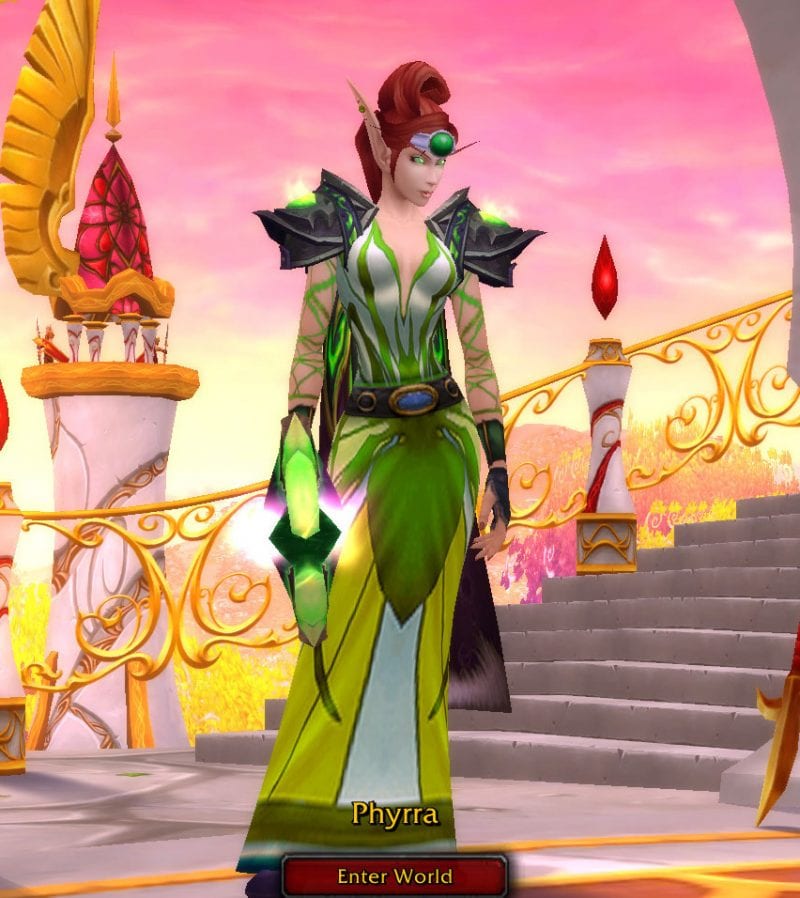 My third favorite class to play is Mage. Specifically, I love the Frost Mage specialization. You get an elemental pet, lots of direct damage spells, and of course, portals.  Phyrra is a level 73 Blood Elf Mage. 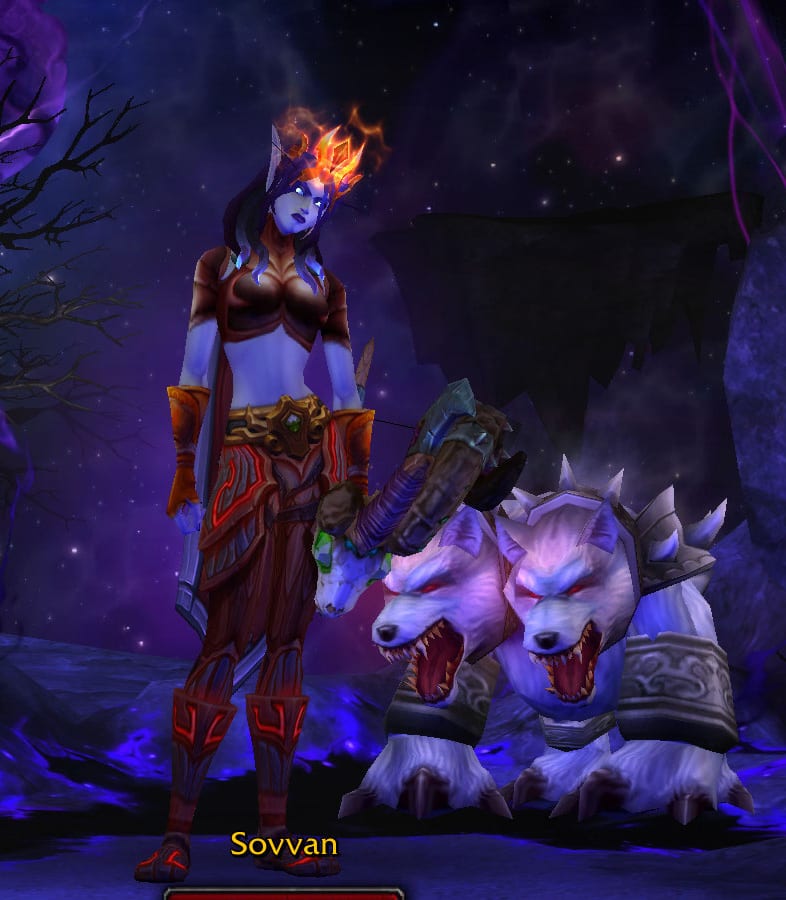 Sovvan is a level 106 Void Elf Hunter on Medivh. Once I unlocked the void elves, I race changed her from draeni to void elf. It had been so long since I played her that I forgot her pet was named Phaedra, so I had a little cry over that when I logged in. 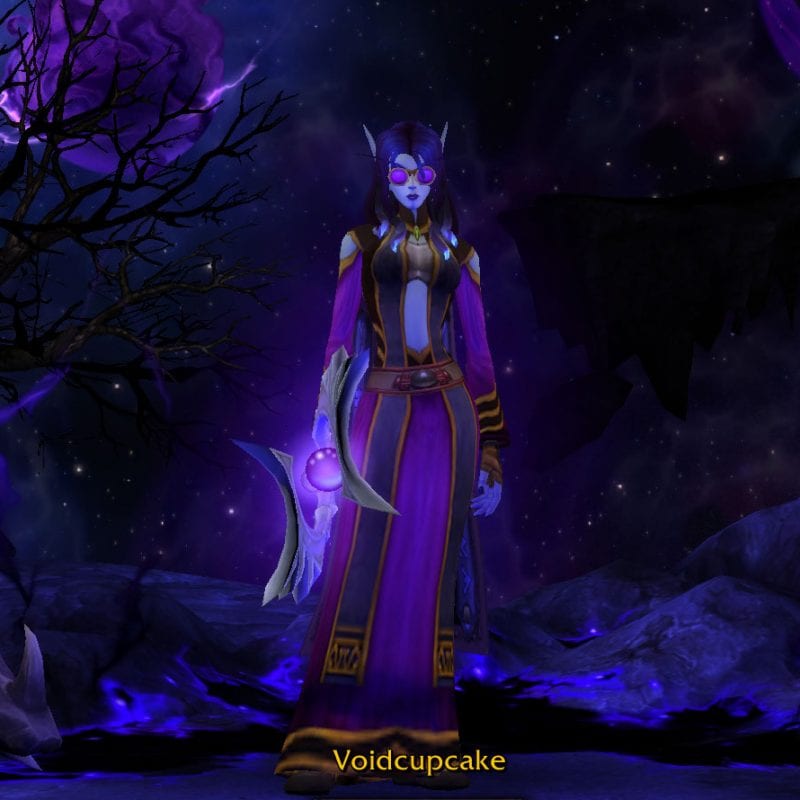 Voidcupcake is my level 85 Shadow Priest. Priest is a healing class typically, but can also be Shadow to do damage, like I prefer, or Discipline. I can’t really speak about the other specs because I’ve never played them. 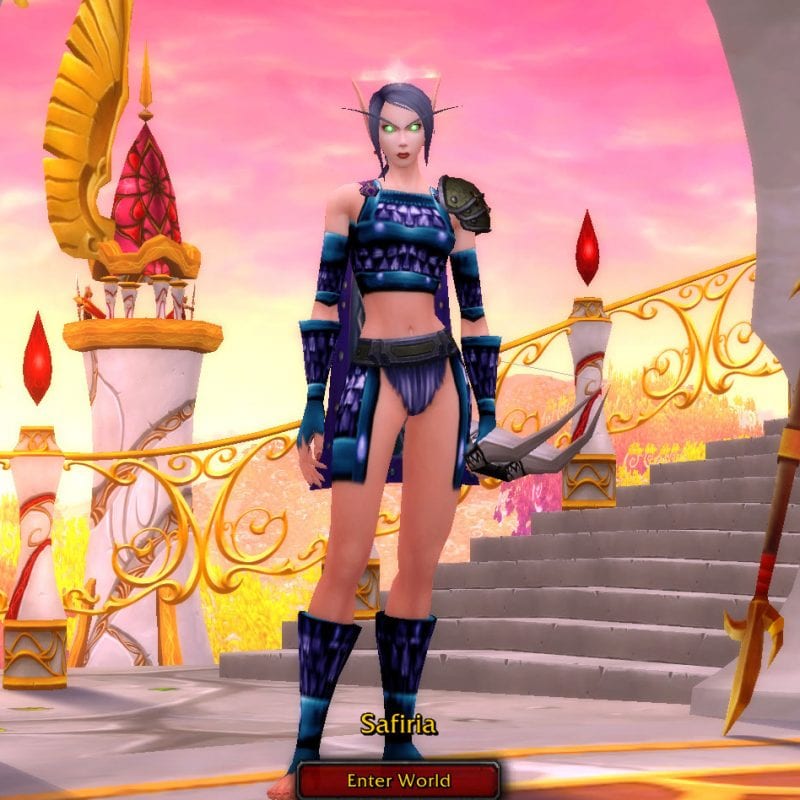 Safiria is my baby Blood Elf Hunter on Medivh. 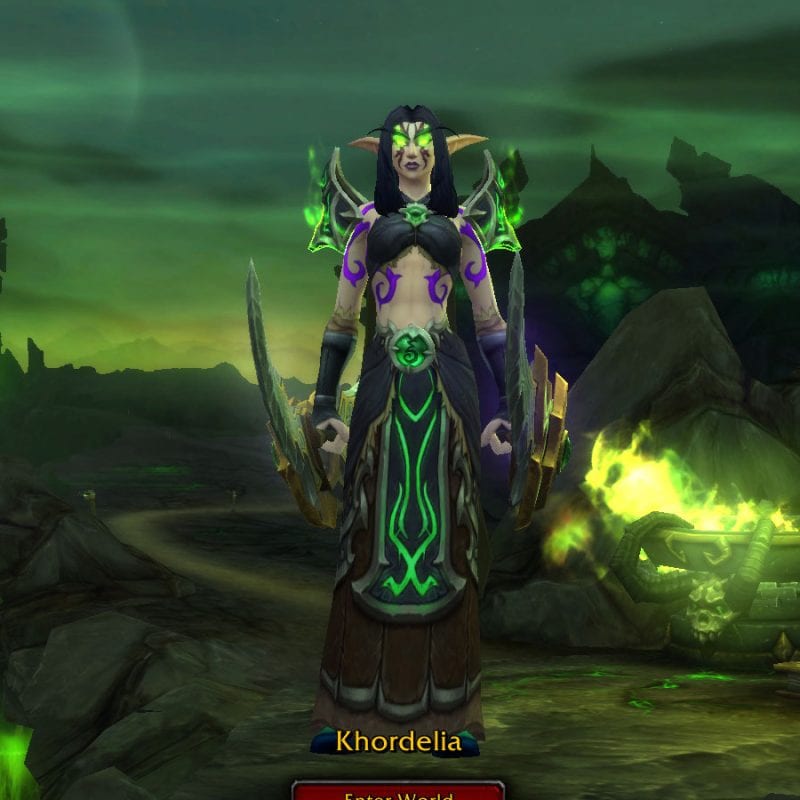 Khordelia is my level 100 Demon Hunter on Medivh.

What to do in World of Warcraft

Once you go all the way through leveling from level 1 to 120, you’re probably wondering what the heck can you do. There’s still plenty to do! The world is filled with some amazingly beautiful zones to explore, especially when you’re at home practicing social distancing. (see my tips for how to social distance)

I used to raid in World of Warcraft. I spent way too much time in a raiding guild every week. At this point in time, I’m not interested in raiding. There’s a new expansion that will be out in a few months time and things may change by then. Who knows.

PVP stands for Player versus Player. You can do PVP battlegrounds in groups, which can be fun. I also used to do PVP in 2 v 2s and 3 v 3s during tournament season. I may do that again if I get really into it.

I love pet collecting! Pets are little companions in game that don’t fight against monsters with you, but you can battle them! Battle Pets will remind you a bit of Pokemon or Monster Rancher. Gotta collect ’em all! Seriously though, I’m working on collecting as many as I can.

Just like pets, you can collect a ton of mounts. There are flying dragons, sea horses, nightmares and all kinds of things to ride and collect. Some are very difficult to get. Some you can only unlock with the Recruit a Friend feature.

Now this is what a ton of my friends love to do! They love to go and collect  transmogs! Transmogrification (also known as transmog, tmog, xmog or simply mog) lets you make your outfit look like one of the many pieces of armor or weapons you’ve picked up during play. You can read more about it here. I love to collect transmogs as well, because I’m typically trying to make the coolest outfit I can for my character.

I’m also spending time unlocking the rest of the Allied Races. I unlocked Void Elves first, because I love elves and they have glowy pulsing hair. I had a mighty need for that! I’m now working on unlocking the Vulpera (a race of fox people), Nightborne (who look like drow elves from D&D), and Dark Iron Dwarves.

I highly recommend giving World of Warcraft a try, both for gamer newbies as well as veterans of gaming. It’s brought me a lot of enjoyment over the last decade and a half. World of Warcraft is better with friends, so I also suggest playing with friends. You can also play solo, especially if you pick a class with a pet, since the pet can help you out.

When I came back to WoW, I played Siovhan the Worgen Warlock up to level 66 to see how the class had changed. When Dave decided he was tired of our Worgen duo (and I was itching to play Void Elves), I switched to Voidcupcake the Void Elf Shadow Priest to pair with Dave’s Voidcake the Void Elf Warlock.

Since I’ve come back from my WoW hiatus, I’ve played my all-time favorite character Lucretzia, to get her up to 120. I used a WoW token from buying the newest expansion to create Khordelia at level 120 on Wyrmrest Accord.

Once I’ve got the Nightborne and Vulpera unlocked, I’ll have to figure out what I’m going to play as them. I’ve never really played the Shaman class extensively, so I might try that if it fits.

And now you’re all caught up on my World of Warcraft obsession. What’s your latest obsession?