I put together a little picture tutorial on how to depot a Flirt! Dreamy Eyes Eye Shadow. Since I’d never tried depotting eye shadows before, I wasn’t sure how hard or easy this would be. I tried watching some videos on youtube but they were hard to find and many had bad lighting, so I figured a picture tutorial would be helpful.

First up, you need the eye shadow and the following tools:
A towel, a pair of scissors, a knife and a candle lighter.

Please make sure that you’re in a well ventilated area, although with this method you’re not really burning plastic, so there shouldn’t be noxious fumes.

You’ll want to lay the towel down on a hard surface. Then place the eye shadow on the towel.

Open the eye shadow case up.

You can easily pop the mirror off, just keep bending it backwards and it will pop off.

Put the mirror off to the side, then lay the eye shadow face down, extended out as far as you can.

You’ll need to pop the bottom part of the case off. Use a knife CAREFULLY to pry the side that held the mirror off of its track inside. The reason you want the eye shadow on the towel is to cushion it, so you don’t break off the eye shadow while you’re forcing the case apart.

You can see below how I’ve forced it open.

Now the other side.

You can see both sides below are off the track.

Now you need to hold the shadow side (right side) down on the towel, while you pull/bend left with the bottom (left side).

Once you have it off, you have the hard part done! However, next you need to use heat. This is where you need the Bic Candle Lighter with the long stem. While the shadow is still facing downward, you take the long lighter (which you can hold down the button and keep it lit, away from your face) and run the flame along the bottom part of the pan for about 20 seconds. Basically you want the glue inside to loosen up.

After you’re done with the flames, you’ll notice a tiny little hole on the back.

Take your knife, again CAREFULLY, and put the tip into that hole and press. You should hear a pop as you’re loosening up the shadow.

Now flip your shadow over! Carefully, put your tip into the side between the pan and the plastic.

Then carefully get your knife under the pan to lift it out.

Then set the shadow to the side. Go to the original bottom of the shadow case, the one that was such a pain to remove. Carefully peel off the sticker with the name.

Then cut the sticker in half. I like to cut it small enough to fit on the bottom of the shadow.

Then you can place the label on the bottom of the shadow pan.

Finally, slip your shadow into a palette. Voilà! You’re done. 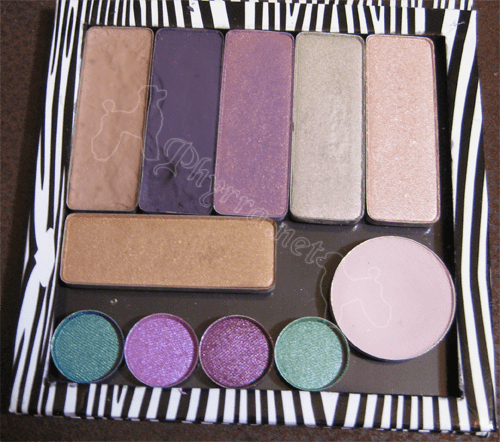 It took me three tries to get it done correctly. However, it works quite well. Make sure you start with your least favorite shade first, instead of your favorite!!!

Have you ever depotted shadows? These really were the first I’ve ever depotted. I’ve seen a bunch for depotting MAC but never tried doing it yet.