Today’s Guest Post is by my dear friend Ana of Lipsticks & Lightsabers. [Her blog is still on hiatus, but it will be back eventually!] **Also, please do not post spoilers in the comments of this review, per Ana’s request.

Portal began as an innocuous little puzzle game included as a bonus inside The Orange Box compilation. Originally intended as a humorous extra thrown in with the popular Half-Life 2 and Team Fortress 2, Portal’s success was unexpected and unprecedented.
Despite being short and simple, the gameplay was original, challenging and fun, (helped in no small part by Valve’s much-praised physics engine) but it was the combination of original gameplay, unique, darkly comic story together with one of the wittiest scripts in any game to date that made Portal so overwhelmingly popular.

Winner of numerous awards, including Game of the Year for 2007, Portal was short and sweet – it came out of nowhere, dazzled us, spawned its own memes and cult following, and left us wanting more.

The disadvantage of this success was that fans wouldn’t be caught unawares again – the original Portal may have been a happy surprise, but now we had expectations. Portal 2 had a lot to live up to. 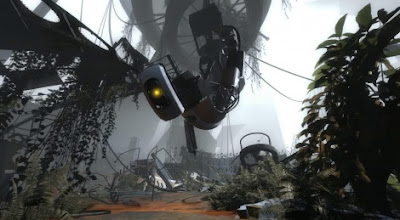 GLaDOS’ design was based on the Botticelli painting ‘The Birth of Venus’.

Four years after its predecessor, the sequel is finally here. Portal 2 begins chronologically after Portal 1, with the player character from the first game, Chell, waking up from stasis in the Aperture Science laboratories to discover that many years have passed since her first adventure.

GLaDOS, the insane AI who ran the facility and tried to bake you in the first game is back, naturally, but you also have new characters to accompany you through the game.

Wheatley, voiced by Stephen Merchant, is a pro hacker.

The most obvious new addition is Wheatley, a not-so-bright robotic core sidekick voiced by Stephen Merchant. If you’ve ever seen anything by Ricky Gervais, he’ll probably sound very familiar. Wheatley is definitely a prominent character, so if you find him irritating it might be a little too much – personally, I love Stephen Merchant and thought his voice was the perfect and charming fit for the dumb little droid.
English voice actors are used a lot in American games, and whereas in Fable I want to drown out the endless sea of NPCs who all sound like they come from either Somerset or East London, Wheatley’s voice was characteristic, appropriate, but still realistic and recognisable to anyone who actually lives here.

Wheatley isn’t the only new character; as the game progresses you’re introduced to other new voices, all of whom are connected to Aperture in some manner or other. They’re all witty, extremely entertaining and each reveal more about Aperture and the game’s backstory. Together, they make the game more involving – these aren’t your usual “Press B to Jump!” NPCs; you won’t want to play music while gaming and risk missing anything. 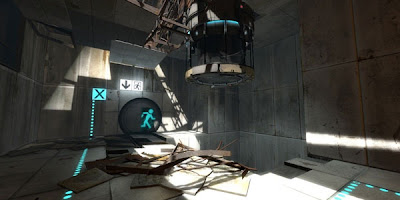 Place could use a bit of a tidy-up. 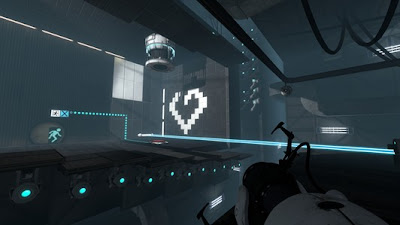 Portal 2 is much longer than the original, allowing you to explore the absolutely huge facility and discover more about it in the process. Although the game is linear, it often doesn’t feel as if it is; the area is absolutely massive and your unique method of travel allows you to explore much of it, far beyond the testing chambers of the first game. In fact, I died far more often falling off walkways and so on trying to get to the test chambers than I did in the chambers themselves. 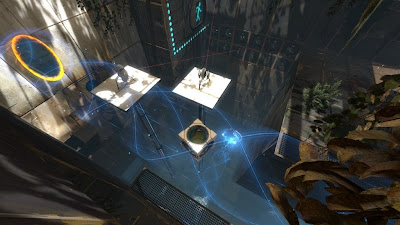 Portal 2 does have new chambers, though, with new puzzles, and with new puzzles comes new mechanics. Portal 2 keeps the devices from Portal but introduces new innovations like propulsion, and repulsion gel, which will make you run faster or bounce, a conversation gel which can make any surface portalable, bouncy plates, swirly tunnels, light bridges and more lasers. 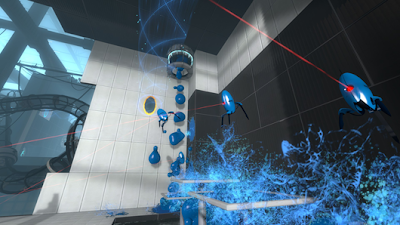 These aren’t too hard to master and add a wonderful new range of possible solutions to puzzles, when combined with the original portal gun and the intrinsic principal of momentum redirection – the idea that objects exit a portal with the same direction and velocity they entered. My primary criticism of Portal 2 is that this rule is not explained in Portal 2 as it is in the original Portal (as GLaDOS explains it, “speedy thing goes in, speedy thing comes out”), even though it is key to solving many of the puzzles. In fact, none of the mechanics introduced in the first game are explained again in the second, instead relying on the player to be familiar with the first Portal game.

While I understand this from a story point-of-view, I think the game could have been stronger and have wider appeal – not just as a sequel, but a strong game in its own right – if it included a tutorial option which introduced new players new to the basic gameplay concepts covered in the first game.

Platforms, the Planks of Tomorrow!

I played Portal 2 on the Xbox 360, and found the controls simple and intuitive, and the extras really worthwhile. The Achievements are funny and often really add to the humour of the game; there’s a good mix of achievements for game progression and hidden extras, and there’s even a couple of free, unlockable avatar options, including a mini companion cube for your avatar to play with.

I did wish the audio options were more comprehensive – there’s only the option to change master volume and music volume, and I found the music pretty sparse and would have liked the option to turn it up, or loop it, or hear more of it when I was stuck on a puzzle for a considerable length of time and had run out of dialogue.

I can’t comment on the PC and PS3 versions, but as Portal 2 also has a 2 player co-operative mode allowing online play as well as split-screen, anyone wanting to play with friends should take that into consideration when deciding which platform to buy it on, since you won’t be able to play someone on Xbox Live from your PS3 and so on. 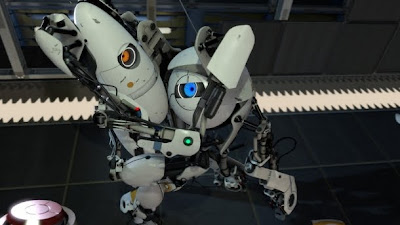 ATLAS and P-body, demonstrating the loyalty of robots.

Portal 2 introduces the 2 player mode, which is an extremely welcome addition. The players control two robots – ATLAS and P-body – and steer them through the test chambers, guided by GLaDOS and working together to solve puzzles. These puzzles are different from the single player ones, and require two people working in tandem to solve.

I haven’t played this mode beyond the introduction, but I’m delighted the option is there and that it provides a whole new set of levels and more gameplay, as well as the option of online play as well as splitscreen. I’m looking forward to being able to play it with my boyfriend and introduce the game to my neighbours this way.

The Xbox 360 also has a set of achievements unique to the 2 player mode.

The original Portal raised a lot of questions, and Portal 2 goes beyond answering them. In fact, it does what every sequel promises to do but almost never actually does – it gives you more of what you loved the first time. Not the same content simply repeated, but a huge expansion, building on the aspects of the original game we loved, but developing on it, with new additions, new mechanics, new levels and content, new characters – all of which are masterfully woven into a giant exploration of what Aperture is and was, where it came from, how it started and developed.

It’s a shame that Portal 2 doesn’t include a tutorial to recap the things covered in the first game, but given how cheap and quick Portal is, it could serve as a tutorial for the sequel on its own, and hopefully that was the point, and it will encourage newcomers to play the first game as well. Portal 2 is, of course, much more enjoyable if you’ve played the first Portal, although I think it’s an excellent game in its own right, and even more enjoyable than the first one.

Although the single player game can still be completed in a day, it feels bigger, more expansive and involving, and the extra 2 player mode is almost an entire other half of the game with its new content and levels.
Portal 2 doesn’t feel like a sequel, rather it makes Portal feel like a preview of Portal 2. It would have been easy to repeat the same cake memes and throw out some new puzzles, but Valve have gone beyond that to fully realise the possibilities that the original Portal so briefly hinted at.

All in all, I think I can safely say this was a triumph.