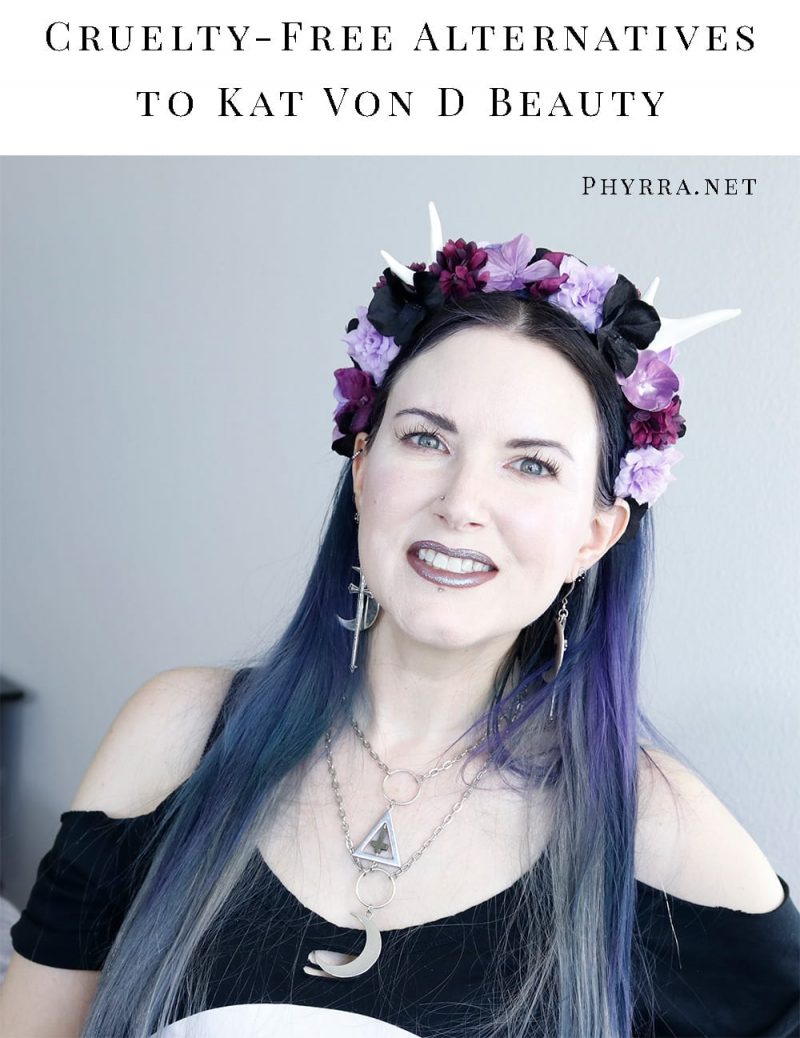 Today I’m sharing 18 cruelty-free alternatives to Kat Von D Beauty. For when you love the aesthetic of Victoriana but not the diseases, as a friend put it. While Kat Von D is cruelty free and vegan, she’s also still anti-Semitic and anti-vaxx. As a Jewish person, I’m not comfortable shopping from someone who is anti-Semitic. I realize that Kat Von D made a video that said she’s not anti-Semitic, but she didn’t really address the elephant in the room, as they say.

If she had only had one or two incidents, I would have continued to give Kat the benefit of the doubt as I did for years. You KNOW I love her products and have raved about them in the past. It was only after my grandmother died last summer, which happened around the time of the anti-vaxx stuff, that I tried to look more deeply into these incidents and was disgusted by what I found. It would have been easy for Kat to say she doesn’t hate the Jewish people. She didn’t. Also, just because she is Latina, it does not mean that she is not racist. That’s like saying ‘I’m not a racist because I have black friends.’

Looking for an updated version of this? Check out the Best Gothic Makeup Brands to Try in 2020!

People have asked me many times now if I will change my opinion on Kat Von D and the truth is if she were to literally publicly say ‘I love the Jewish people. I support the Jewish people. I stand against anti-semitism’, yes. But she already took an opportunity to make a video and didn’t do that. Count me disappointed as I’d brushed off the handwriting thing in the past and thought that she wasn’t anti-Semitic for years.

I looked up to her and loved her brand and style. But well, when a group of people wants you dead, you let that go and move on. At least I still have Dita von Teese and Avelina de Moray to look at for inspo.

I didn’t think it needed to be said, but just in case it does. I’m only speaking for myself, not the entire Jewish community. I’m not asking anyone to boycott Kat Von D Beauty. I’m explaining why you will no longer be seeing me review Kat Von D Beauty on my blog, because I get asked about it weekly.

Leaping Bunny Certification is my gold standard for cruelty-free beauty. I’m fully confident in all Leaping Bunny Approved Makeup Brands. I do love that all of these brands have vegan offerings, too. And yes, most of them are indie makeup brands.

Which of these cruelty-free alternatives to Kat Von D Beauty have you tried? Which do you want to try? Are you into the goth aesthetic?

My therapist has been training me to look for patterns of behavior in people (to help me identify whether they are safe for me to be around or narcissists or abusive). So I look at behavior and if it’s something I don’t like, I look to see if the person has addressed it. If they’ve addressed it and never had another issue since, I usually think they have grown and fixed their issues. If they had bad behavior, addressed it, but then do it again, I don’t think they’ve grown. I’ll be watching to see if Kat Von D -- and Jeffree Star for that matter -- apologize and show growth afterwards. So far I haven’t seen either of them show growth.

Are you new to goth? Check out the top 5 goth myths busted!