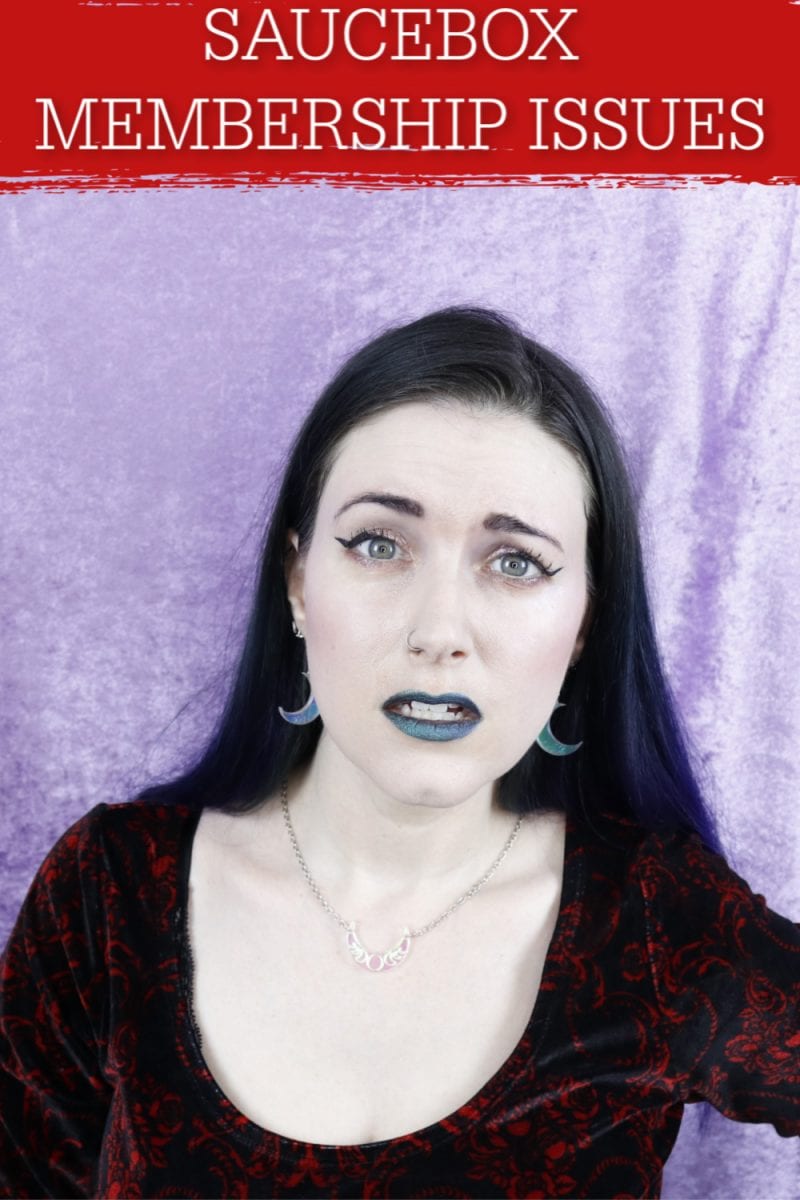 I’m horrified to have to make this blog post and video today about the Saucebox Membership Issues. As you know, I have been a Saucebox fan for years. Saucebox is a cruelty-free indie makeup brand with a lot of vegan options and they are moving towards being 100% vegan. In May 2018 the Saucebox membership was first offered. The main Membership details – $175 cost, goodies sent automatically before everyone else, 25% off personal discount on anything you want to repurchase, goodies from partner brands in every shipment. Saucebox Cosmetics & Moonslice Beauty both belong to Alla.

At the end of the Saucebox Membership Issues video I share my thoughts and feelings on the subject, as well as a personal life update.

Special thanks to the PhyrraNyx Facebook Group Mods & Members who helped me piece together this timeline.

This is the end of the Saucebox Membership issues for 2018, but unfortunately there were many more in 2019.

There are 4 main Saucebox Membership benefits.

The desired resolution for the Saucebox Members is for them to receive the full $700 value they were promised.

I did reach out to Alla as soon as the PhyrraNyx Facebook Group Mods let me know about this situation.

I said – Alla, what is going on? Madelyn posted this and there are over 200 comments of people coming forward saying that you never delivered any of the stuff you said you were going to for the membership. I know you’ve had issues, you’ve told me of issues over the past year, but I did not think that meant that you would not fulfill your obligations to the people in my group who were part of your sub box. They’re really unhappy, and I am upset. I feel like people are being ripped off 🙁

Alla said – I never told anyone to fuck off and lied. All I’m doing is fixing this fucking mess I’m working with my lab to deliver me products in January that we are able to deliver in timely manner. all sales are always final For SB. It’s been like that from the beginning. So we are putting together a box with $500 worth of product from SB and participating brands for January. it was the worst business decision I’ve ever made. and I regret it every day. I’m still going forward and fulfilling my obligation. I’m not running away.

While I share my full thoughts on this insane situation at the end of the video above, I did want to share a little here. I’m so sorry for what everyone in the PhyrraNyx Facebook Group has gone through. Once the PhyrraNyx Mods alerted me to this I was horrified. I’m so hurt and upset that people in our Fam were taken advantage of, that I was taken advantage of. Alla left the PhyrraNyx Facebook Group a few days before all of this came to light. I felt like Alla and I were friends, so I really felt blindsided by this entire situation. I thought she and I had bonded over our mutual love of makeup and poodles.

One of the big reasons I loved Saucebox is good quality products and they were all-inclusive. If you looked through their facebook or instagram feed they had models of all skintones and sizes. I will not be featuring Saucebox until this situation is resolved.

I sincerely hope that Alla will make things right and fix the Saucebox membership issues. I hope she provides the desired resolution that the PhyrraNyx Saucebox Members want. When I contacted Alla on behalf of the members in the PhyrraNyx Facebook group, she said she would be fulfilling her promise.

This whole thing happening makes me wonder if I should just be done with blogging at this point. The last two years have been rough and this is starting to feel like it may be the straw that broke the camel’s back.

I wanted to include a link to Alex’s video on these issues with Saucebox. She’s also a member of the PhyrraNyx Facebook group. And someone made a post in Beautyboxes on reddit about the issue.

I genuinely hope that Saucebox fulfills its promise to the VIP members and if that happens I will create a follow up video! To be clear, I don’t want to see Saucebox fail. I love indie brands. I do not love people feeling like they have been taken advantage of by an indie brand. 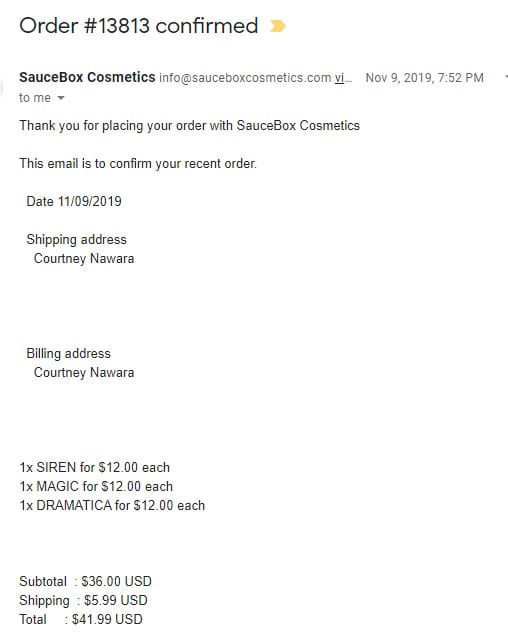 I wanted to add in that I just realized today that I have an order from Saucebox from November 9, 2019 that as of today, December 20, 2019 has not been fulfilled. Aka, I have not received this order in the mail. So I am owed either $41.99 OR these 3 eyeshadows. I doubt I will see either.

Since making this video and blog post live, I have been called names such as vile, vicious, and nasty for putting together this timeline to help people out.  If me helping out my friends, family, and subscribers who have been affected by the Saucebox VIP Membership Subscription Box understand the timeline, the promises made, what promises were kept, and what is still outstanding is nasty, I’m a nasty gal.

I could not open a dispute in PayPal for my last order from Saucebox. I had to call PayPal on the phone and have them open it because of how Saucebox blocked me within PayPal. I had to explain to PayPal what happened and provide supporting documentation for my claim. Hopefully I will see a refund for my missing transaction.

I hope everyone who shopped with Saucebox gets their orders, their VIP membership items, or a refund.

Again, I had hopes Saucebox would do the right thing. And maybe Saucebox/Alla will, but, they’ve definitely burned their bridge with me after this Saucebox Membership Issues fiasco.

Jen Luvs Reviews talked about the Saucebox VIP Membership issues and compared it to the Lisa Frank Glamour Dolls vapour ware that never came to be, where tons of people had money stolen from them.

Frances, from the PhyrraNyx Facebook group shared this FTC link with the group – The Mail, Internet, or Telephone Order Merchandise Rule is consumer protection. It basically says that a company has to deliver within their stated turnaround time or get permission to extend that turnaround time. If no permission is given, the company must, without being asked, provide a refund.

“The Rule, issued in 1975, requires sellers who solicit buyers to order merchandise through the mail, via the Internet, or by phone to have a reasonable basis to expect that the sellers can ship within the advertised time frame, or, if no time frame is specified, within 30 days. The Rule also requires that, when a seller cannot ship within the promised time, the seller must obtain the buyer’s consent to a delay in shipping or refund payment for the unshipped merchandise.”

Since my video has gone live, the people in the PhyrraNyx Facebook Group have been told ‘the end of January’ now ‘the end of February.’ So the goal post has moved again and it’s over 20 months.