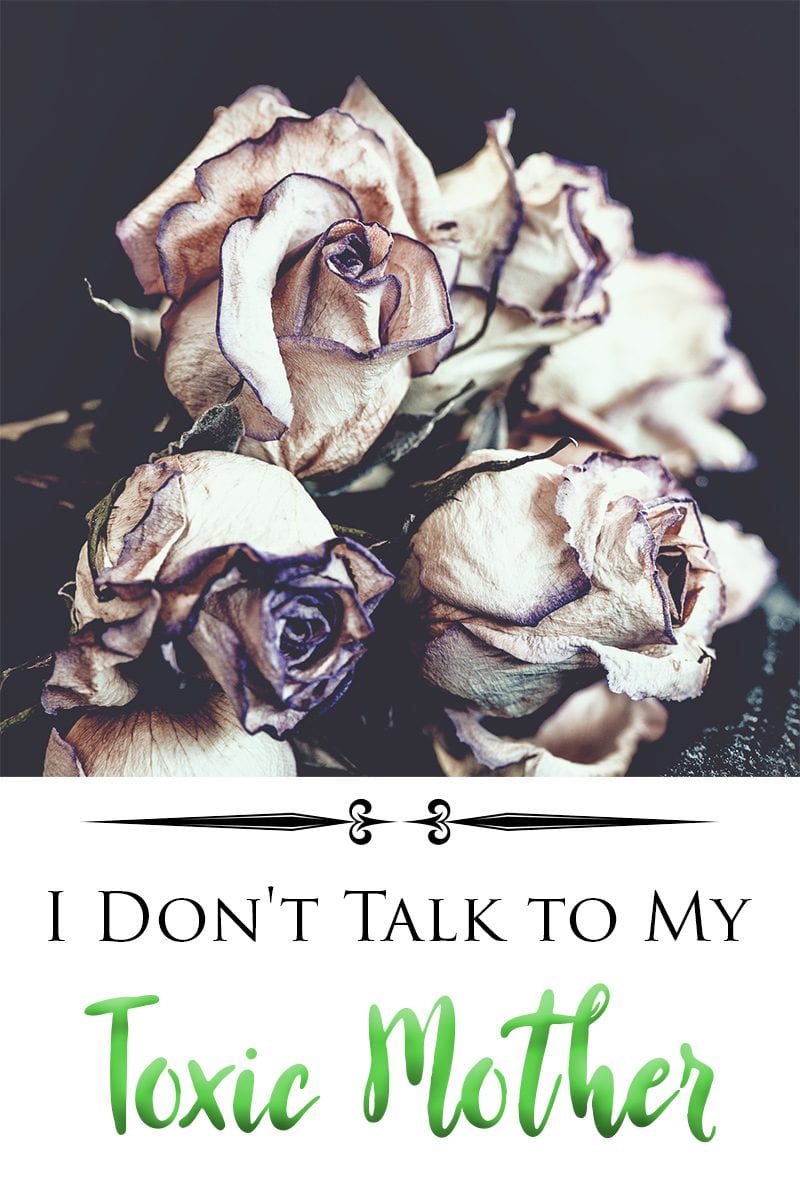 I Don’t Talk to My Toxic Mother

I don’t have a relationship with my mother. I broke it off several years ago when I realized she was toxic. Our relationship wasn’t healthy and wasn’t adding anything positive to my life. Worse, it was making me miserable.

So I ended all contact. It was hard. I cried and agonized over whether it was the right thing to do. My brother told me I should forgive her for what she’s done because she’s our mother. However, I simply don’t believe that because someone is blood, you should forgive them over and over. Family is more than blood. (yes, I threw in a Supernatural reference. Bobby’s filled with wisdom.)

I have mothers that I love. My mother-in-law is a great woman and I enjoy spending time with her. She’s always been wonderful. I’m not gonna lie, I’m envious of the relationship that she and my husband have. She was an amazing mother for him while he was growing up. She supported him no matter what decisions he made and always offered him helpful advice.

My stepmother and grandmother have both been prominent figures in my life. They both helped to raise me. They provided me with guidance and are also wonderful people. I enjoy the time that I spend with both of them.

That said, when Mother’s Day rolls around, I feel cheated. I wonder what did I do that my mother never loved me the way she loved my brother. Growing up I felt like my mother didn’t really love me, that I was an inconvenience to her. That it was my fault for her not finishing high school because she got pregnant so young (I think she later got her GED). I felt like she really used me as a way to get my father to marry her.

Some of the other things she said, things like ‘You’ll never be as pretty or as thin as I am,’ stuck with me for years. I remember her yelling at me and my brother one time that he was an accident, that she’d gotten pregnant on the pill with him. All I could think is, why would you tell your child that? That’s horrible.

Last year, when I decided to do a Gilmore Girls marathon, I was bitter. I couldn’t help but think about how that could have been me and my mother. I felt cheated out of a real relationship with my birth mother. But time and time again, she chose other people over me and my brother. We were an afterthought, a nuisance.

Rather than sit on these feelings, I talked with my therapist. I learned that my mother had narcissistic tendencies and that there was nothing I could do to make things right.  I had no self-esteem for years because of the criticisms and judgments she laid on me. I had to fight to build myself up, to love myself.

If you have a toxic mother (or father), you’re not alone. It’s ok to stop talking to them. You don’t owe them or anyone else an explanation for why you decide to cut someone out of your life.

Family is more than the people you’re born to. Family can be who you choose to make them. I don’t think being related to someone by blood means that they’re going to be better for you than someone who isn’t related by blood.

The people I consider my chosen family, who aren’t related by blood, matter to me. They understand why I don’t talk to my toxic mother. They’re a great support network who understand what it’s like to have someone gaslight you. They make the sadness and pain easier to bear. And I’ve finally accepted, it’s ok to hate Mother’s Day.