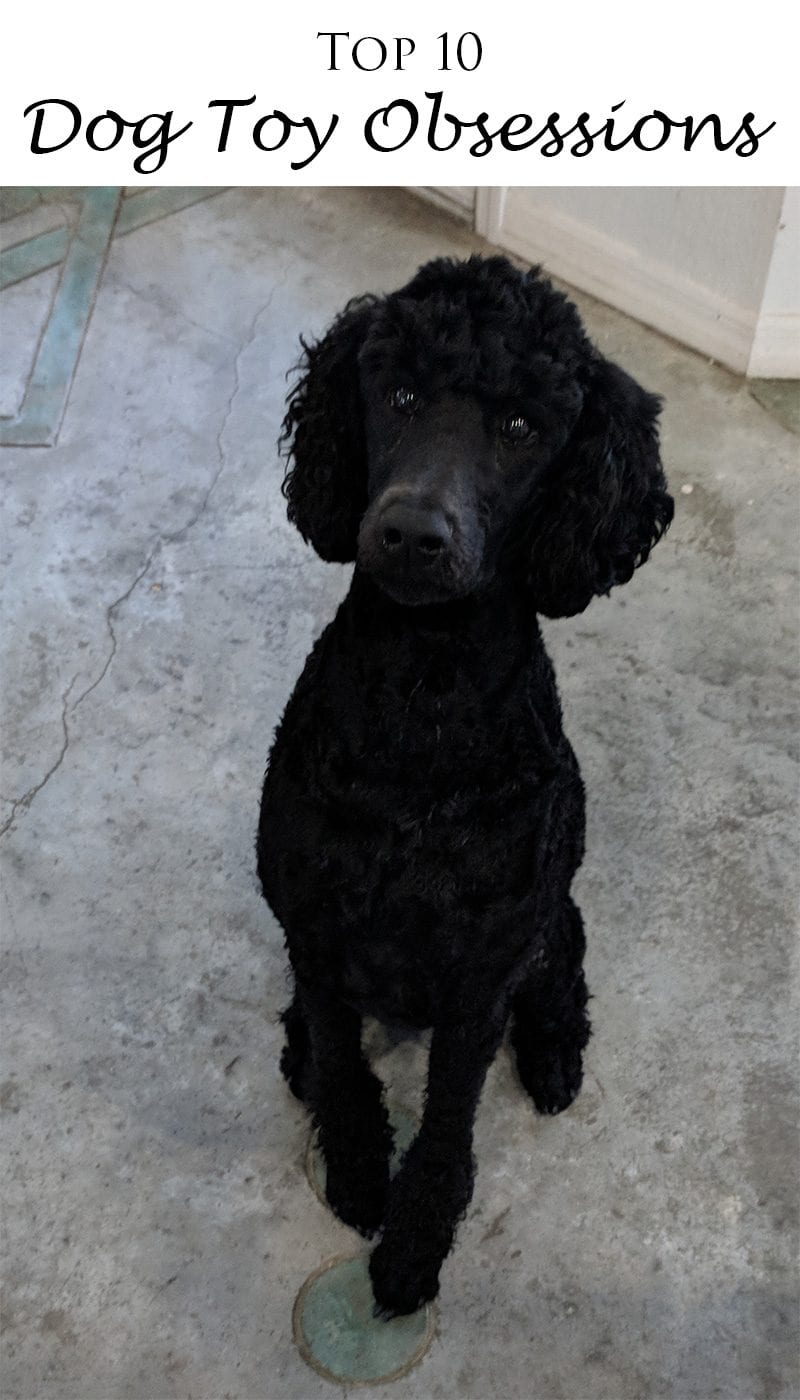 Today I’m sharing Nyx’s Top 10 Dog Toy Obsessions with you. Nyx is quite picky with her toys, and she loses interest with most within a few minutes. However, these ten toys are the ones that capture her attention. She has the most fun with them! All of these toys are available on Amazon.com. Most have Prime 2 day free shipping.

This is the toy that never ends! Seriously though, we’re on Lamb Chop #4. Nyx and Phaedra both adore this toy. Nyx will often play fetch with Lamb Chop. She loves to carry her around in her mouth. Lammy, as we affectionately call her, has squeakers in all 4 feet as well as the body, so it’s really easy to get Nyx worked up and excited with this toy. Phaedra has ripped up two of them and Nyx has destroyed one. In general, though, they never play rough enough with Lammy to destroy it, making it a long-lasting Dog Toy Obsessions.

The Outward Hound Snake is one of the most serious dog toy obsessions for Nyx! We will squeak this snake rapidly, then fling it in a figure 8 pattern around our legs or just above the floor. Nyx will chase it and squeak it mercilessly. She ends up with an almost manic look in her eye. She loves the snake!

The Wooly Snuffle Matt was recommended by my friend Noel and the dogs love it. It’s a stimulating way to feed them food. Nyx prefers something like this for food instead of food in a bowl. It also forces her to eat slowly.

The Outward Hound Flapper Dog Puzzle is one of Phaedra’s favorite toys and it has also become a favorite for Nyx. You just fill up the toy with food in each of the compartments and the dogs will not only have to lift up the flap but also push it around to get all the treats inside. It’s a great way to stimulate the brain, making it a healthy dog toy obsession!

My poodles love their puzzle toys. Nyx mastered this jigsaw puzzle in no time flat. She still enjoys playing with it! You fill up the little compartments with treats and she has to nose pieces in different directions to get all the treats.

The Hipat Puzzle Dog Food Dispenser is a relatively new addition to Nyx’s dog toy obsessions. Her new trainer recommended something like this as an additional way to give her stimulation. Nyx and Phaedra loved it so much that after buying the first one I had to buy a second one. In general, I normally have to buy two of any food puzzle toy.

I bought two of the Kong Wobbler Treat Dispensing Toy. Phaedra and Nyx can’t get enough of batting this guy around to make treats (or kibble) fall out.

Kong makes some of the best dog toys on the planet. Nyx is seriously obsessed with the Kong Squeaky Tennis Balls.  These are soft enough to squeeze to make a squeak, but firm enough to bounce if you throw the ball. She loves to carry one around in her mouth making it squeak as she walks.

The West Paw Zogoflex Qwizl is a fun little guy. I smear peanut butter inside him and pop him in the freezer for frozen treats for the girls. It’s adorable to watch Nyx carry the Qwizl from room to room in her mouth.

While the Qwizl is similar to the Tux, Nyx goes crazy for the Tux. She loves both the Qwizl and Tux, but when asked which one she wants, she goes for the Tox every time, making it at the top of her dog toy obsessions. I put peanut butter inside this one too and freeze it, then pull it out for her. It will keep her entertained for quite a while.

If you’re looking for new ways to entertain your dogs or fun toys for them to obsess over, you need to try Nyx’s Top 10 Dog Toy Obsessions. They’re puppy approved!