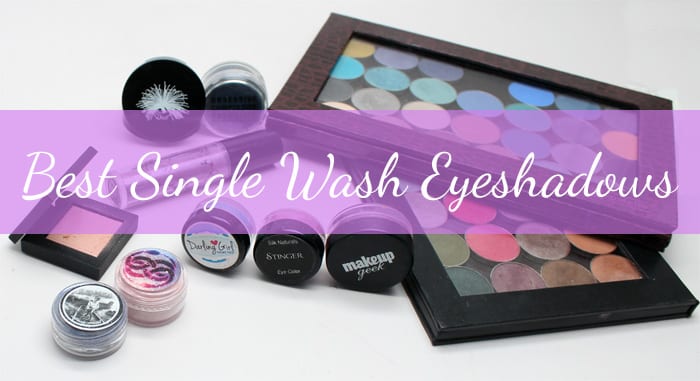 Happy Makeup Wars Monday! Today I’m bringing you my picks for the best single wash eyeshadows. Single wash means colors that I will apply to my lid and crease, or all over the eye area for a simple eyeshadow look. Rather than tempt you with colors that are LE that you can’t have, I dug through my extensive eyeshadow hoard to bring you shades that are currently available (as far as I’m aware). With almost all of these, I would still recommend using a base shade like my favorite Urban Decay Walk of Shame. It was hard to limit myself for this post. Some brands, like Sugarpill, Darling Girl and Fyrinnae, I just wanted to say ‘ALL THE SHADES!’ but I held myself back. With Fyrinnae, I didn’t choose as many as I normally would have because their store was closed and I was afraid of choosing discontinued shades. So hopefully the ones I chose are still available. If not, Fyrinnae is great at recommending similar shades.

I’ve included sheer, duochrome, bright and dark shades. You can pair any of these with a cat eye or just mascara. There really are a lot of eyeshadows here because once I started swatching I just kind of kept going. Swatch fest! Many of these eyeshadows also look really cool over a black base – like Scout, Lumi or Dinosaur Plushie. I played with my macro lens, which I haven’t used in a long time. I still need to figure out the best settings with the macro lens.. In my lightbox it looked like my ISO was fine, but the pictures turned out dark, so I need to up the ISO to brighten them.

All brands and colors cruelty free. Shades that  I know are vegan are marked as vegan. All eyeshadows swatched on Coastal Scents Step One primer. I swatch on primer because I have hooded eyes and without primer, eyeshadow wouldn’t last an hour on me.

Sugarpill Lumi (vegan)
Snow white with turquoise sheen and flashing bursts of blue and green. When worn over a dark base, this complex white transforms itself into your new favorite blue eyeshadow.

Fyrinnae Sorceress (vegan)
Soft charcoal with shimmer which changes from a brilliant aqua to vibrant cool pink, depending on light and angle.

Fyrinnae Because Cats (vegan)
wine-grape layered on a dark base, sprinkled with rainbow sparkle.

Virus Insanity Clawdeen
Clawdeen is a shimmery medium brown with iridescence that shifts from green to gold to purple.

When I used to work in an uber conservative environment, Sonic and Cutie Pie were staples in my eyeshadow wardrobe.

Darling Girl Tragic Death of Mr Stay Puft
A light toasted tan with a hint of blue, red and gold iridescence just like the adorable toasted villain we loved. Love this shade!

Notoriously Morbid Silent Samurai
A lapis/violet with such a strong cerulean shift and so much blue sparkle. This is currently available at Notoriously Morbid but will sell out soon because it’s from the Walking Dead Vanishing Cabinet! It’s such a gorgeous shade I had to include it.

Geek Chic Luck Dragon (vegan)
A warm coraly-pink (think cotton candy) with intense turquoise duochrome and stuffed to the scales with every color of pastel shimmer and iridescent glitter.

I just swatched these eyeshadows on regular primer. Many of these shades would benefit from Fyrinnae Pixie Epoxy, Darling Girl Glitter Glue or e.l.f. Studio Makeup Mist & Set to really help the colors pop and the duochromes come to life.